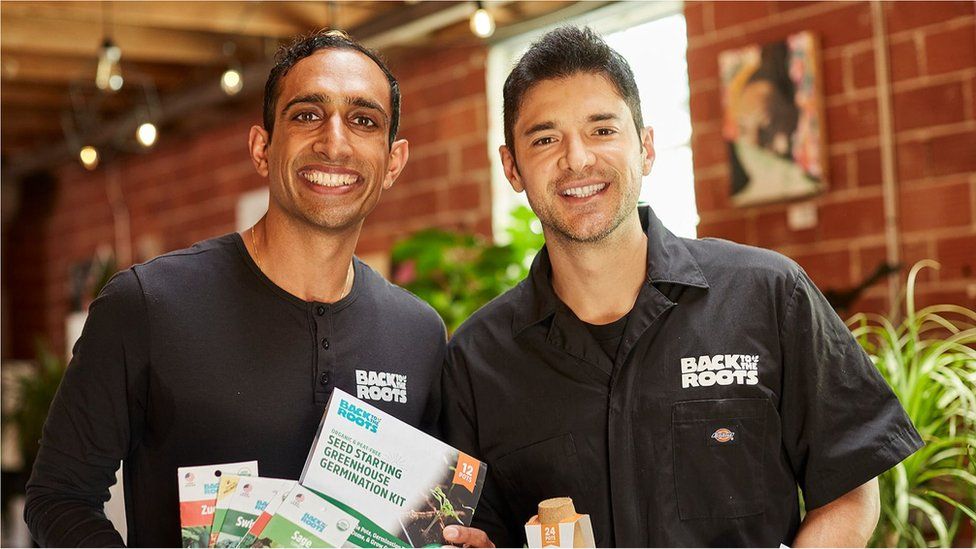 Image source, Back to the Roots

For the past two years, Nikhil Arora has been working hard to cut his organic gardening company's carbon footprint, taking small steps, like shifting away from plastic packaging, to make his business, Back to the Roots, the most environmentally efficient it has ever been.

The California-based company is small, employing just 21 people, but it expects to make roughly $100m (£84m) in sales this year. Mr Arora says the moves it has made are critical to the fight against climate change.

"Small businesses are the lifeblood of the US economy. We power most of the jobs, most of the growth and, therefore, I think we will also power most of the change," says Mr Arora, co-founder of the company, which started selling organic gardening kits more than a decade ago.

Corporate giants such as Amazon and Walmart have faced much of the public pressure over sustainability goals.

But a company's supply chain produces 11 times more emissions than the company on its own, the Carbon Disclosure Project (CDP), a non-profit charity that runs the global emissions disclosure system, has found.

In industries like retail, it found that supply chains produce 25 times more emissions than the company itself.

"You can't solve the climate problem without addressing small businesses," says Michael Vandenbergh, law professor at Vanderbilt University and director of its Climate Change Research Network. "They make up a very large share of the carbon emissions associated with big companies' supply chains... so you can't get to any meaningful change without dealing with small businesses."

Small businesses make up 99% of US companies and employ nearly half of the American workforce.

But their sheer numbers make it easy for them to fly under the radar and mean they're tough to regulate.

Advocates say focusing on supply chains can make it easier to engage with small businesses, unlocking billions in emissions savings.

"For an individual company, their relative impact is not high," says Simon Fischweicher, head of corporations and supply chains for the CDP's North America branch. "But when you think about the collection of tens, hundreds and millions of small enterprises that are suppliers to these large corporations, they're incredibly important.

"So global value chains are one of the most effective tools driving impact."

If it's true to say the US is the engine of the world economy, then small and medium-sized businesses are the fuel that drives that engine.

Small businesses create nearly two-thirds of new jobs in the workforce and account for 44% of US economic activity. So what's the secret to their success? What challenges do they face and which are the best cities and regions for them to thrive?

As the climate crisis worsens and larger companies look for the most efficient ways to reduce their environmental impact, cutting a company's "Scope 3" emissions - or emissions from the supply chain - has gained traction with big companies.

At COP 27 in Egypt, the UN's annual climate summit, more than a dozen of the world's largest food firms said they planned to end deforestation in their supply chains by 2025, making collaboration with smaller suppliers key to accelerating climate action.

US retail corporation Walmart attributes 95% of its emissions to its supply chain, which includes thousands of small suppliers. "From day one, working with small businesses was key," says Jane Ewing, senior vice president for sustainability at Walmart.

"We feel we can play a really important role in saying, 'Hey, here's some tools,' and then we help guide them along that journey. We've seen more [small businesses] lean in than ever before."

In 2017, Walmart launched Project Gigaton, which aims to use its might to help small firms in its supplier network track their carbon footprint, set sustainability goals, and access more favourable loan terms.

Mr Arora's Back to the Roots joined the programme in 2019, along with 2,400 other businesses, in the hope of lowering its emissions.

Mr Arora, who counts Walmart as his biggest client, credits the retailer with helping his business find, solve and track its main sources of carbon emissions, pushing it towards its goals.

"This is by far the most efficient we've been in terms of carbon emissions. We've been able to scale this company at an exciting pace while also not increasing our environmental footprint," he says.

Walmart says the success at Back to the Roots has been replicated across its network, helping to reduce greenhouse gases by 574 million tonnes since 2017.

That has put it halfway towards its goal of cutting emissions by one billion tonnes by 2030 - an impact equivalent to Germany going carbon neutral for a year.

Walmart is not alone in taking action. Overall, CDP has found that roughly 200 major corporations have leaned on their suppliers to reduce their carbon footprints, helping to reduce greenhouse gas emissions by 1.8 billion tonnes last year alone.

But for many small companies, being sustainable is a luxury.

"They're having to face this perfect storm of rising energy prices, inflation and supply chain disruption. So the very first challenge for these small businesses is how to survive. It's hard for them to make the time to add another project to the list," she says.

At the Carbon Disclosure Project, Simon Fischweicher is staying optimistic. One day he hopes that supply chain decarbonisation will become so commonplace and accessible that even small businesses will start looking at how they can reduce their own value chain's carbon footprint.

Source: https://www.bbc.co.uk/news/business-63460919
We use cookies to ensure that we give you the best experience on our website. If you continue to use this site we will assume that you are happy with it. Ok